The price of legal services is increasing faster than the CPI’s basket of goods and services.  Perhaps that is not surprising to those of us working in the legal sector. However, legal services are also losing wallet share.  In 1987, legal services made up 0.435% of the CPI-U basket.  By December 2016, the proportion was 0.245%.

This second trend is telling us something important about the future of law practice, particularly in the PeopleLaw sector.

This post breaks the analysis into three strands. Section 1 presents the CPI data, including technical information on the CPI sampling and weighting methodologies. Section 2 offers some possible explanations for why wallet share for legal services is trending downward.  Section 3 uses CPI data to compare legal services with cost and wallet share of college tuition and medical care.  (Preview: costs in the meds and eds sectors are outpacing the CPI-U, yet their wallet share is growing.)

1. CPI and “Relative Importance” within the CPI Basket

The chart below presents the relevant CPI data for legal services. In interpreting this graph, note two vertical axes. The green axis (left side) is the CPI-U with the base year set to 1986 (Index = 100).  Over the last 30 years, the green and grey bars show the cost of legal services rising nearly twice as fast as the overall CPI-U basket (334.5 versus 218.5).

The orange axis (right side) measures the “relative importance” of legal services within the CPI basket. The  orange trendline shows this statistic over time.  Basically, as the relative prices of goods and services change, consumers adjust how they allocate their money. The BLS tracks these changes through the Consumer Expenditure Survey. Through detailed interviews and spending diaries conducted twice a year from a representative sample of urban households (89% of the US population qualifies as urban), the BLS measures recent consumer behavior and re-weights the composition of the CPI-U basket.

In the chart above, you’ll note a sudden drop in 1997 in the relative importance of legal services (from 0.480% to 0.329% of consumer spending). This drop occurred because the BLS re-weighted the CPI basket for the first time in several years.  Since the mid-2000s, however, the BLS has re-weighted the CPI based on two-year rolling averages. Thus, the relative importance data for 2015 and 2016 are calculated based upon spending patterns from 2013 and 2014. See Relative Importance of components in the Consumer Price Indexes, Dec. 2016. When 2017 data are released, it will likely be based on weights from 2015-16.

Finally, note that the CPI data on legal services is limited to consumer spending. This is the PeopleLaw sector, which other data sources show is on the decline. See, e.g., Post 037 (between 2007 and 2012, individual consumer spending on legal services declined from $65.5 billion to $58.8 billion).  In the chart above, none (or very little) of the data reflect spending by organizational clients.

I share this technical information on the CPI so that readers have the full context for following troubling claim:  As the cost of legal services goes up, average Americans are finding ways to forego legal services. This is likely a major factor for the shrinking of the PeopleLaw sector, see Post 037, and an under-discussed factor in flagging law school enrollments, see Post 006. Many prospective students are drawn to law as a way to help people.  Yet, lawyers working in PeopleLaw are probably telling prospective law students, “It’s getting harder to earn a living.” See Post 037 (discussing results of 2017 Clio Report).

2. Why is the relative importance of legal services trending downward?

Unfortunately, we lack the data to answer this question with precision.  Below I offer two plausible contributing factors

a. The DIY law movement

One factor that might partially account for the decline in PeopleLaw legal expenditures is the rise of the DIY (do-it-yourself) law movement.  The online form-driven products may be an attractive substitute for an office visit to a local small firm practitioner. For a summary of these offerings, see We Rock Your Web review of The Best Online Legal Services.  It is worth noting that many of these offerings have an A+ rating from the Better Business Bureau).

The most successful of these companies, LegalZoom, has positioned itself as publishing-technology-marketing company that throws off legal work to a network of independent law offices.  To protect and grow its brand, LegalZoom carefully monitors the client satisfaction figures of its referrals.  Cultivating and channeling the legal needs of consumers, and thereafter monitoring client satisfaction, is not the practice of law. However, it is a set of services that can potentially benefit both lawyers and the individual clients they serve.

A second possible explanation for legal services’ decline in relative importance is waning value of state courts in resolving disputes. This trend line would occur when the cost of a lawsuit, including the need to retain a lawyer, becomes too expensive relative to the underlying problem or dispute.

In Post 006 and 037, I discussed the disturbing statistics in the NCSC’s Landscape of Civil Litigation in State Courts Report, which was published in 2015. Drawing upon 925,000 cases disposed of between July 2012 and June 2013 in ten large urban counties, the NCSC researchers identified 228,000 cases that resulted in a non-zero monetary judgment.  The median judgment amount was a mere $2,441 — hardly an amount that can support the cost of hiring a lawyer. Further, only 24 percent of cases had the benefit of attorney representation on both sides of the dispute.  Stated in the alternative, 3/4 of cases involved a party going it alone without a lawyer.

If things are as bad in large urban state courts as the NCSC suggests, it is likely that the volume of state court filings is on significant downward trajectory. The reason is simple — lawyers won’t file cases where they know, upfront, that they can’t recoup the value of their time.  Further, going to court without a lawyer is a daunting prospect most citizens would prefer to avoid.  Thus, the lower the case values, the fewer the case filings and the higher the volume of default judgments.

An insider in the Illinois court system tipped me off that state court filings were indeed trending downward.  To duration and magnitude of the change, all I needed to do was pull figures published from in Annual Report on the Illinois Courts, which are published online.

Illinois is a good sample because it is a “single tier” jurisdiction that handles every type of civil (and criminal) matter in the state, including small claims. Also, Cook County Circuit Court (encompassing Chicago) was one of the ten jurisdictions included the NSCS Landscape Report.

Below are the number of civil case filings in the Illinois courts from 1997 to 2016. 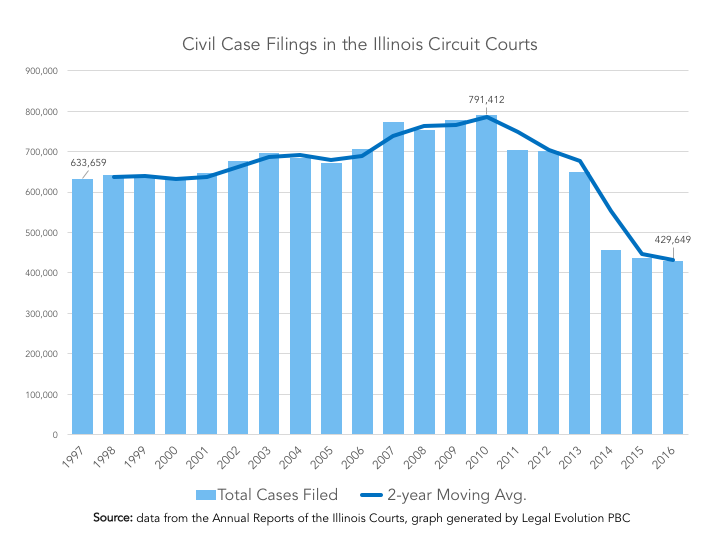 Since 2009, the number of civil filings (which includes all cases for monetary damages, real property disputes, review of administrative bodies, and proceedings related to probate, eminent domain, mental health, and municipal taxes) has tumbled from 791,000 to 430,000, a drop of 45.7 percent.  It is possible that the peak years (2009 and 2010) were driven foreclosure actions related to the financial crisis.  However, over the last 20 years, civil filings have declined from 634,000 to 430,000 (-32.2 percent).  Yet, the Illinois state population grew from 11.9 to 12.8 million people.

According to a recent report by the Illinois Supreme Court Commission on Access to Justice, “In 2015, 93 of Illinois’ 102 counties reported that more than 50% of civil cases involved a self-represented litigant on at least one side. In some case types, that number rose as high as 80%.”

Now let me boil is down:  At least in Illinois, which I doubt is an outlier, civil state court filings are the decline; and among those that are being filed, a large and growing proportion involve self-represented litigants.  In other words, the entire state-run judicial system appears to be breaking down, in part because the system is predicated on the assumption that all parties are represented by counsel, an assumption that increasingly does not hold.

3. “Cost disease” in the meds, eds, and legal sectors

I became interested in the CPI index for legal services when reading a book on “cost disease” by noted labor economist William Baumol.  See William J. Baumol, The Cost Disease: Why Computers Get Cheaper and Health Care Doesn’t (Yale 2013).

What is cost disease?  Basically, large productivity gains in some sectors (e.g., manufacturing, technology, agriculture) can have the effect of increasing the relative prices in other less productive sectors. This is particularly true for sectors that rely heavily on the labor of highly educated knowledge workers.

Baumol first identified this relationship when studying the economics of the performing arts. Baumol and his co-author William Bowen acknowledged that human ingenuity has devised many ways to reduce the labor necessary to produce industrial wares, yet “no one has succeeded in decreasing the human effort expended at a live performance of a 45 minute Schubert quartet much below a total of 3-man hours.” See Baumol & Bowen, Performing Arts, the Economic Dilemma 164 (MIT 1966). Despite the immovability of the musicians’ productivity, musicians’ wages went up with the rest of the workforce.

Within the economics literature, the industries most associated with cost disease are medical care and higher education. But, as Baumol points out,  other “personal service” sectors are also highly susceptive to cost disease. Examples include legal services, K-12 education, local police and fire (basically, most of government), and many others.  Cost disease is a serious policy issue because (a) goods and services like medical care and higher education are perceived as integral to our quality of life, and (b) when their costs rise much faster than the CPI-U (i.e., “cost of living”), it generates much political handwringing.

The graph below compares the CPI-U to the consumer price of three sectors prone to cost disease: medical care, college tuition, and legal services. The consumer cost of legal services is roughly on par with medical care but significantly less than college tuition.  Yet, as shown in the table below, when it comes to wallet share, both medical care and college tuition are growing in relative importance within the CPI basket of goods and services.

It is worth noting that in the CPI-U tracks only consumer spending patterns. Americans are spending a larger proportion of their household income on medical care and college tuition.  However, medical care and college tuition are also finances by other parts of the modern economy.  In the case of medical care, this comes through employer-provided health insurance, Medicare, and Medicaid. Likewise, Department of Education student loans enable borrowers to effectively defer the cost of college tuition until after graduation.  Thus, the table above reflects only the costs paid out of current household income.

Yet, different consumer attitudes toward medical care versus legal services arguably have a dramatic impact on the willingness of young people to enter these two professions.  Below is a chart that compares applicants to law school versus medical schools. Since Post 001 of Legal Evolution, I have harped on the topic of “lagging legal productivity.”  The above analysis shows that if legal services cannot be delivered more efficiently, ordinary citizens will forgo legal services.  This is not a prediction; it is a statement of what is happening today.  State courts are glutted with self-represented litigants. At the same time, lawyers struggle to find clients who can support their practice.

The problem is not the necessarily the escalating cost of a lawyer’s time ($260/hr in the most recent CLIO survey, see Post 037), but our failure to update our institutions so that ordinary citizens can resolve their legal problems in a convenient and cost-effective way.  In other words, it’s time to redesign some of our most hallowed institutions.  This is the challenge of the next generation of lawyers, judges, and legal educators.